skip to main | skip to sidebar

botShots is an expanding and evolving resource for artists, students, educators and enthusiasts of both art and robots.

Featuring the 'Best-in-Show' of the Robot Art world in any media, we keep the editorializing to a minimum and strive to let the work speak for itself. Our statement on quality was made by it's inclusion in our collection.

Each image is linked to a larger version for more detailed examination and a link to the website of each artist featured is also provided.

We hope you enjoy... 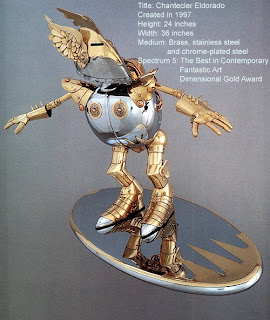 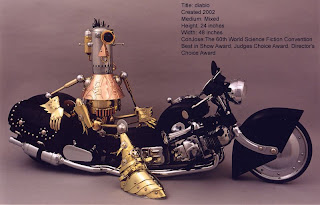 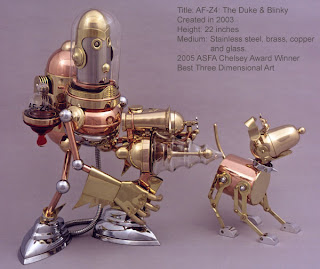 'The Duke and Blinky'

The Art of Robotics

Perhaps no other mechanical device has inspired artists to create, in every imaginable media, while also being so easily accepted as an art form by the art establishment and loved by the community at large.

So what makes Robots so different?

ArtBots - Robots in, and as, Art

The Robot has been a muse for Artists for over a century. From paintings, drawings and animations, films and videos, sculptures, music, furniture, design elements of architecture, clothing and even food.

The Robot - as inspiration and icon - is everywhere.

RecTech: A term I coined to describe - The fusion (or use) of Recycled or Reclaimed material(s) with Technology or into Technologically inspired, aesthetically pleasing, pieces/objects (functional or not), usually for the purposes of Art. (whew)

It is, in fact, a moral imperative, an aesthetic and a philosophy.

Can we justify the creation of 'new' art whilst we continue to over-consume, and therefor produce 'waste', beyond our capacity to reasonably and safely contain it?

Should we be sending tons of our 'instantly-obsolete' techno-gadets and aged computers to fashion third-world mountains of hazardous waste?

Is everything we throw away - garbage?

Is it all no longer useful?

Is it without potential to become, at least, aesthetically pleasing?

Clearly (and luckily) vision, creativity, talent and passion, say differently. It may just be what saves us.

A Rhetorical Poll to Ponder: Why are Robots so damn sexy?

The following botShot resources are available for you to make use of including two brand NEW custom Widgets ('Recent Posts with pictures' and a 'Slideshow' version) that you can add and feature botShots great content on your own blog or website.

If you'd like to indicate your work is featured on botShots, or you just like the site and want to help us spread the word, you can link to us using the newly created botShot badge!

Android: a robot designed to look and act human.[1] The word derives from ανδρός, the genitive of the Greek ανήρ anēr, meaning "man", and the suffix -eides, used to mean "of the species; alike" (from eidos, "species"). Though the word derives from a gender-specific root, its usage in English is usually gender neutral; the female counterpart, gynoid, is generally used only when the female gender is a distinguishing trait of the robot. The term was first mentioned by St. Albertus Magnus in 1270[2] and was popularized by the French writer Villiers in his 1886 novel L'Ève future, although the term "android" appears in US patents as early as 1863 in reference to miniature humanlike toy automations.[3]

Cyborg: a cybernetic organism (i.e., an organism that has both artificial and natural systems). The term was coined in 1960 when Manfred Clynes and Nathan Kline used it in an article about the advantages of self-regulating human-machine systems in outer space.[1] D. S. Halacy's Cyborg: Evolution of the Superman in 1965 featured an introduction by Manfred Clynes, who wrote of a "new frontier" that was "not merely space, but more profoundly the relationship between 'inner space' to 'outer space' -a bridge...between mind and matter."[2] The cyborg is often seen today merely as an organism that has enhanced abilities due to technology,[3] but this perhaps oversimplifies the category of feedback.

Steampunk: is a subgenre of fantasy and speculative fiction that came into prominence in the 1980s and early 1990s. The term denotes works set in an era or world where steam power is still widely used—usually the 19th century, and often set in Victorian era England—but with prominent elements of either science fiction or fantasy, such as fictional technological inventions like those found in the works of H. G. Wells and Jules Verne, or real technological developments like the computer occurring at an earlier date. Other examples of steampunk contain alternate history-style presentations of "the path not taken" of such technology as dirigibles or analog computers; these frequently are presented in an idealized light, or a presumption of functionality.

Cyberpunk: is a science fiction genre noted for its focus on "high tech and low life".[1] The name is derived from cybernetics and punk and was originally coined by Bruce Bethke as the title of his short story "Cyberpunk," published in 1983,[2] It features advanced science, such as information technology and cybernetics, coupled with a degree of breakdown or radical change in the social order.

RetroFuture: Retro-futurism, retrofuturism, retro-future or retrofuture, terms combining "retro" and "futurism" or "future", can refer to two distinct concepts: A style of design or art or a sociopolitical ideology.

Retrofuturistic design is a return to, and an enthusiasm for, the depictions of the future produced in the past (most often the 1920s through 1960s), both in science fiction and in nonfiction futurism of the time, which often seem dated by modern standards.[1] The ideology combines retrograde sociopolitical views with techno-utopianism. [3]

Why does California, and the San Francisco 'Bay Area' specifically, seem to be home to as many Robot Artists as Japan has 'actual' Robots and roboticists?

Is there just something in the water or air, like whatever is responsible for producing all of their blond women? Is it being so close to Silicon Valley or Hollywood? What is with that?

Vote for Us: Dmegs Web Directory